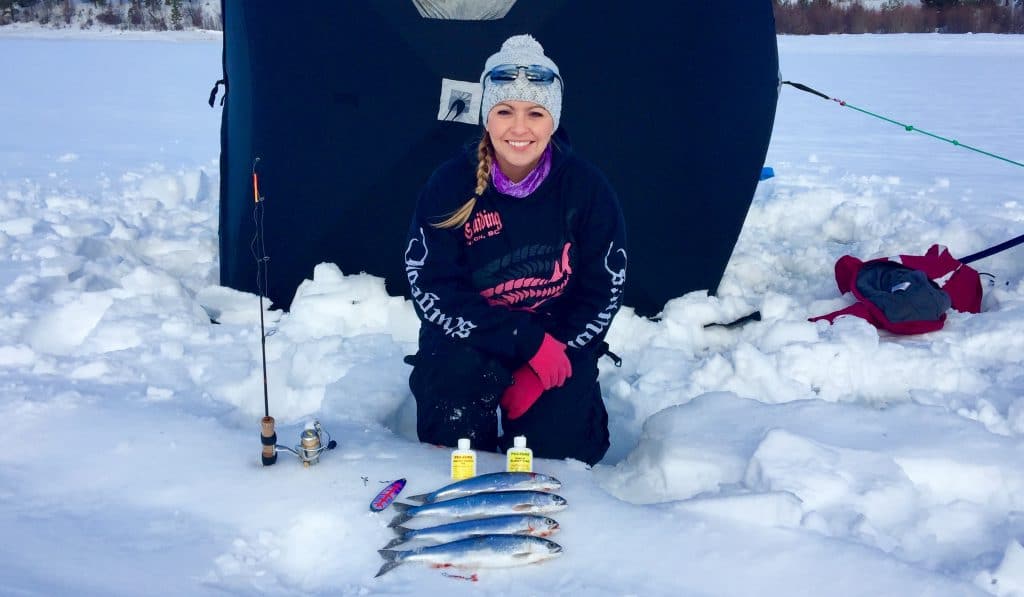 One species of fish that continues to grow in popularity to target during the hard water season in British Columbia is Kokanee. Kokanee are land locked Sockeye Salmon that spend there entire live cycle in freshwater. They are schooling fish and once you locate the active school, ice fishing for Kokanee can turn into a fast action fun filled day.

With their reckless fight, pound for pound Kokanee provide an angler with an exciting ice fishing experience like no other. Just like their ocean going brothers, Kokanee have deep red oily flesh that make them for superb table fare. Combine their delicious delicacy and amusement of catching them, its no surprise that Kokanee are the second most sought after freshwater game fish in British Columbia.

Many anglers are still new to the concept of ice fishing for Kokanee, as it’s relatively a new fishing experience that can now be experienced throughout the province. Kokanee are naturally distributed in lakes within BC and now thanks to the Freshwater Fisheries Society of BC more lakes are being aggressively stocked with Kokanee providing even greater angling opportunities. The hard water season provides an exceptional time for anglers, as unlike the open water season one doesn’t require a boat to reach these fish. Instead, ice fishing for Kokanee provides an affordable family fishing experience that everyone can enjoy.

Fishing for Kokanee is much different than fishing for trout. Kokanee can thrive in lakes that Rainbow trout may not due to their distinctive diet, as they don’t have to compete with other fish species. Instead of ice fishing in shallow water, you will typically be fishing in lake depths between 50 to 100 feet. The reason for this is because Kokanee primarily feed on Zooplankton, which are microscopic organisms that usually suspend within the mid water column. It is important to note that Zooplankton are light sensitive, which means the brighter days will drive them down deeper and the Kokanee will follow. During ice over an angler will typically locate Kokanee any where from 15 feet down as much as 80 feet. The use of sonar will help improve your odds immensely in locating the fish.

The best types of sonars to use when ice fishing for Kokanee are the flasher types such as the Garmin Striker Series of sonars. They provide real time movement on the screen that allows you to drop your presentation right to the fish.

If you do not have access to a fish finder (sonar) then start fishing at 10 feet and work your way down. When fishing with other anglers in your group work as a team. Have one person start at 10 feet and the other at 15, progress deeper until you find the fish. Having a line counter on your reel will help recognize the depths in which you are fishing. If your reel doesn’t have a line counter, simply count out the amount of line in 1 foot pulls that you are using. When you discover the fish you will want to repeat the same depth. A good tip is to add a threaded bobber stop every 20 feet on your fishing line so you can quickly mark how much line you let out. 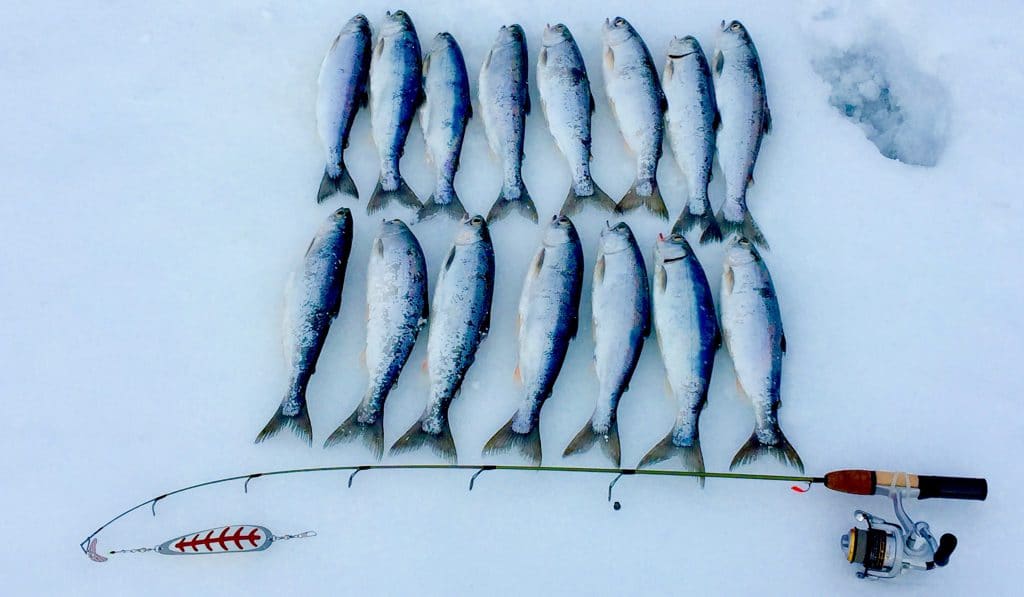 The schools of Kokanee will cruise throughout the lake but will tend to stay in areas that provide plenty of food. Even though there is ice cover, lakes still have current in them, which can push the Zooplankton to a specific end. Points and ledges that reach out into the lake can also provide good forage areas for Kokanee, as the plankton will be pushed up against these zones. When approaching a new body of water simply look around for other signs of anglers, the locals tend to find the best producing areas for Kokanee and they don’t change much throughout the year.

One of the great benefits of targeting Kokanee during the hard water season is the extended season. Due to these fish residing in deeper areas of the lake they don’t become as deprived of dissolved oxygen as other fish species. Later in the ice-fishing season, such as mid-February the fish are not as lethargic and willing to strike a well-presented lure.

The most productive way to catch Kokanee through the ice is by jigging. These little critters are attracted to flash and lots of it! With this in mind jigging techniques consists of using 4 to 6 inch attractors such as a Mack’s Lure Sling Blade Dodger. Run a 6lbs leader between 14 and 16 inches from the attractor of choice to your lure. Having a variety of colours of attractors will increase your odds immensely throughout the day. UV Pink, Silver, Glow and gold or copper Sling Blades tend to be the best producing colours.

The technique in which you want to jig is to jig up and down slowly from between 6 to 20 inch pulls; just enough to get the flasher fluttering to attract these curious Kokanee. When there are no fish around make longer swift jigs to get the attractor to reflect light to help attract the fish from a far. Once the school of Kokanee move in you’ll want to shorten up the amount in which you are moving the lure. Not only will the flash bring in the fish, but also the attractor will transfer erratic action to your lure that will encourage the Kokanee to strike. The key is to always keep moving your presentation as Kokanee will strike very subtle, it’s the constant jigging that will set the hook before you even know you have one on. 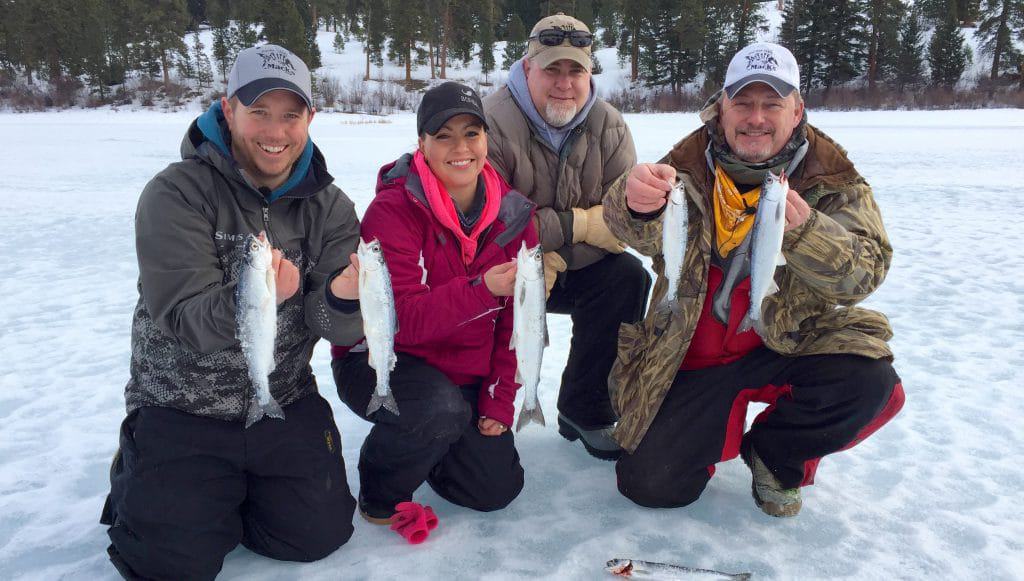 The hook can consist of a plain hook or small jigs. Mack’s Lure Glo-Hooks in red and chartreuse hands down produce the best results. The added glow appearance aids the Kokanee to key in on the lure and encourages them to strike. If you are using a regular hook choosing colours such as chartreuse or red will sometimes help entice the bite. If the hook is tangling with the flasher add a small split shot weight to the middle of the leader.

Some anglers prefer to use small spoons or jigs such as a Mack’s Lure Sonic Bait Fish or HumDinger Spoon. The small jigs and spoons provide that extra bit of action that invites the Kokanee to strike. It is best to try multiple presentations until you find a pattern that is working. What is working one day doesn’t necessarily mean it’s going to work the next.

No matter what lure you are using it is best to tip the hook with some sort of bait. Popular baits that work great for Kokanee includes Pink Maggots (live or synthetic), krill, shrimp or cured and dyed white shoepeg corn. Take your presentation to the next level by adding Pro Cure Scents such as Krill, Shrimp or Trout and Kokanee Magic as it will attract fish from a far and get them to strike on the slowest days. 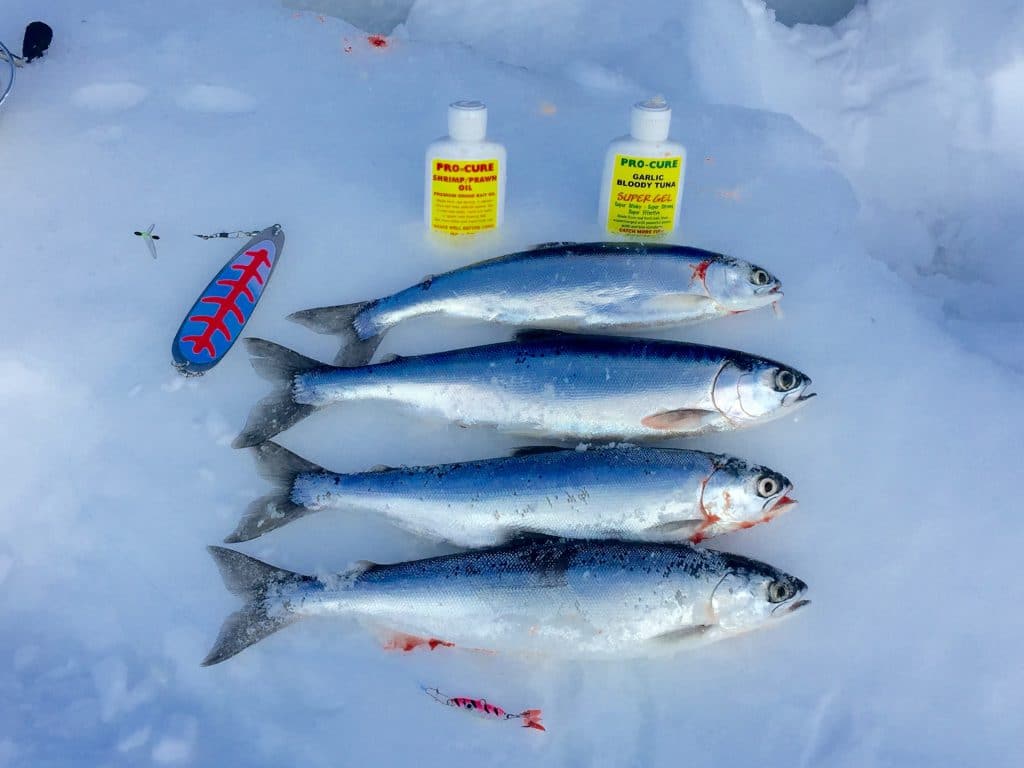 It is possible to “still fish” for Kokanee, which involves suspending the bait with no movement. When using this method scent and bait are a must or the fish will not strike. Be sure to hold the rod in your hand and not resort to a rod holder, you will need to set the hook the moment that the Kokanee bites. The use of bobbers is not recommended, as the bite is so light that it usually will not pull it down. The most effective way is identify bite is to hold the line between your fingers. Still fishing can be effective when the fish are somewhat less active and not willing to chase your jigging presentation. The bait needs to be directly in front of the Kokanee as most of the time they won’t swim upwards to strike a suspended still presentation.

The fishing rod type isn’t as important as the presentation, however a softer rod will help you recognize the subtle strikes and land more Kokanee as they have soft mouths. A small 5 foot casting rod or an ice fishing rod is adequate, really it’s up to you and what you have within your fishing arsenal. 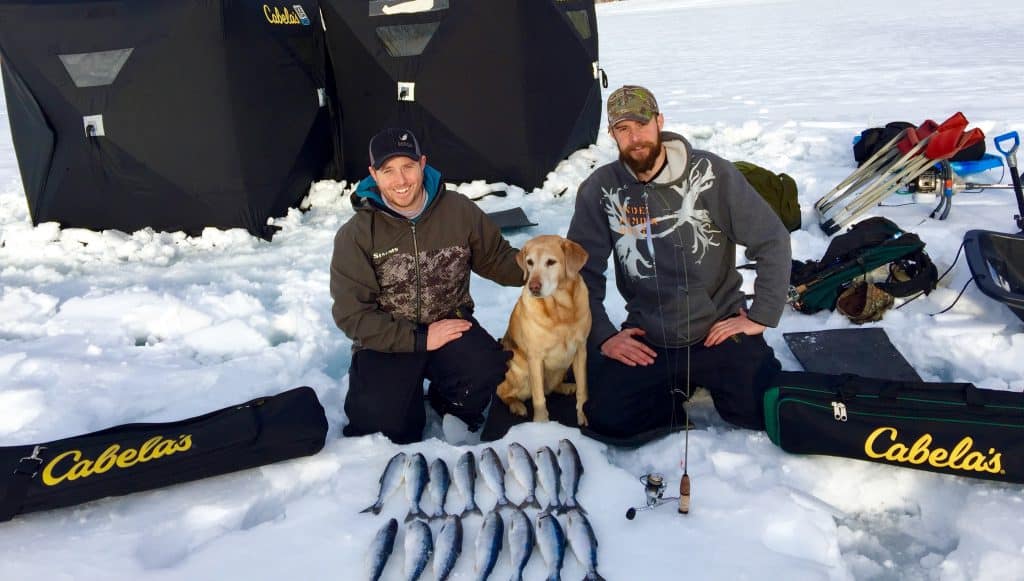 Where to Ice Fish for Kokanee in BC

Since Kokanee require high levels of oxygen you will mainly find these landlocked salmon in mid to large lakes within the BC Interior. The Freshwater Fishery Society of BC has been aggressively stocking numerous lakes around the province with Kokanee and Triploid Kokanee. Triploid fish do not reproduce which means Triploid Kokanee put all their energy into feeding and growing. It is not unheard of for Triploid Kokanee to sometimes reach over 3 pounds.

Kokanee are a fragile fish compared to rainbow trout. They require a well-balanced water system of numerous contributing factors to survive. They do not handle catch and release well and their mortality rate is high even when handled and released with extra care and attention. Releasing the fish while still in the water is the best way to help with their survival rate when not being selected for harvest.

The FFSBC does stock the lakes with Kokanee as a put and take fishery; which means they are there for harvesting. It is good etiquette to limit fishing for Kokanee to the casual appetite for table fare and not just to fill a freezer. It is always recommended to check the fishing regulations before heading out fishing as many water bodies in British Columbia to have lake specific regulations during the ice fishing season.