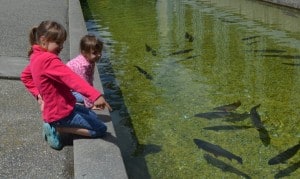 Growing up, I remember going on family outings. I fondly remember that although we didn’t always have the time or money to do a lot of things, the outings we did do were always special in their own way.  Kids will remember the special times spent with you, rather than the toy or souvenir bought along the way.

A couple of weeks ago, I called up the Freshwater Fisheries Society Kootenay Trout Hatchery near Fort Steele and inquired about the Kids learn to fish program. I was greeted with immediate friendliness on the phone, and a willingness to accommodate. I told them that we were coming out and wanted to visit the centre to take part in the Learn to Fish program with a 5 year old and a 7 year old. I asked if they had a set time for the programs. The lady on the other end said “No, but we can set a time up for you”. So we did.

So a few days later, we headed out to the fish hatchery. It was a beautiful, hot afternoon. There were hardly any vehicles in the lot. Good for us in a way, however it would have been nice to see more people at the hatchery.  We crossed the moat outside the centre and the kids were instantly amazed at the size of the trout swimming lazily around. Inside, we met up with Cathy Fiedler, FFSBC staff member who immediately made a great impression on our daughters. She greeted us all with a warm welcome and enthusiastic attitude. 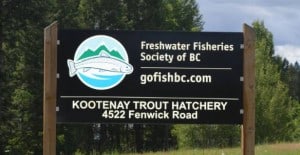 Unfortunately for us, however great for the local fisheries, they had just released the fish from the centre, so there were not a lot of fish to see inside the centre. However the kids learned a lot about what the FFBSC does and how they do it. 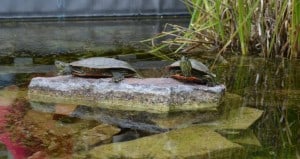 Cathy then took us and showed us the white sturgeon that they have in the aquarium. We then went outside and viewed the Western Painted Turtles that they have in the back pond. After more touring through the hatchery where all the large tanks are, it was time to go out to the Children’s fishing pond.

Cathy took the kids and started with the basics. Everything from handling the fish, to taking the hook out was discussed. We could tell that she cared about the kids having a great time, however it was also obvious that Cathy loves her job and the fish that she works with, because she made sure to cover the handling of fish with great detail. She went over how it was important to hold the fish in a horizontal fashion rather than vertical, and how to hold them gently and not just drop them. She discussed how to release a fish when it is hooked, and how to cradle them in the water and let them swim away from your hands. This was all done with a colorful stuffy salmon. 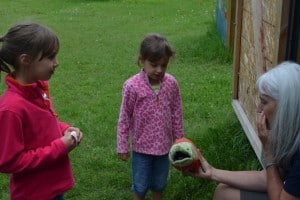 She then went over equipment. The thing that is great about this program is that if you don’t have a rod… don’t worry! They have lots of gear for the kids to use. My kids are used to the spin cast rod with the thumb release. I grew up using these, but have found that they do spool themselves up pretty bad whenever they want. Cathy and the crew out at the hatchery have spin cast, spinning and fly rods available for the kids to use. Because they have never used spinning gear before, Cathy gave them a lesson. Even though it wasn’t their first time fishing, Cathy gave them great instruction that allowed them to be on the water and casting within about 10 minutes of their lesson.

The pond is small, but large enough to accommodate quite a few anglers. The sun was beating down on us still so I wasn’t quite sure how willing the fish would be to take our flies. Cathy kept getting strikes, but nothing that would stay on. After some time, my youngest got bored and just wanted to watch everyone else fish. It was nothing that Cathy did or didn’t do, that’s just how my youngest gets. 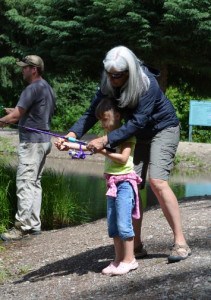 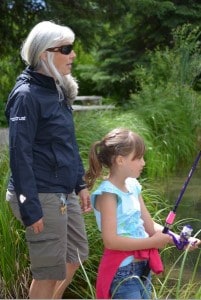 That’s what I have found with kids. I really do enjoy taking my kids fishing, however you have to be sure to realize that it is their day too. If that mean multiple stops for looking at the butterflies, turtles, etc, than that’s what the day may end up being. I try to bring little activity books, or a couple of toys just to keep them occupied when the fish aren’t agreeing with your offerings. 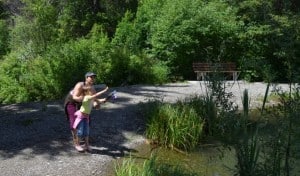 Cathy found that I was a fly fisher and went to the shed to get me a fly rod. I had on a pretty big bugger pattern. After a few casts I managed to get a couple of strikes, but nothing would stay on. Finally our oldest daughter caught one. The sound of the excitement and happiness coming from her when she has a fish on is magic to my ears. We landed it and released it back to it’s home. Soon after I managed to get one on and landed that one too. My wife, who isn`t normally into fishing had a rod in hand and had a great time too. 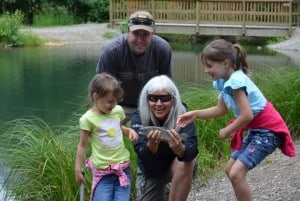 The kids had a great time. Not because of the amount of fish caught, which I believe was 3 in the course of the program, but because Cathy made the whole afternoon such a neat experience. After a little more than an hour or so on the water it was time to head back to the centre which is just a short walk. Cathy went inside and gave the kids more than their fair share of fish food so that they could feed the fish in the moat. Well, that was just the icing on the cake for the girls. They fed them and then Cathy allowed them to ‘pet’ the fish as the fish were rising to get their bounty. 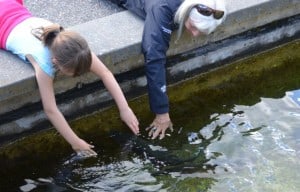 Our girls really enjoyed the trip. That was all they talked about for a few days after.  I would highly recommend that if you are into fishing, and want to get your kids into it, or someone like me who just wants a fun family outing, visit one of the FFSBC Fish Hatchery Visitor Centres that support this program and make your appointment. The FFSBC puts on the Learn to Fish Program at the Abbotsford and Fort Steele Visitor Centres throughout the summer time. They are free with a suggested donation of $5 per child. We gave them more than that as we thought it was well worth the time spent there.

This year is the first year that the Kootenay Fish Hatchery will be putting on a “Youth on the fly day camp”. As per their info sheet- ”In one action packed day, learn the essential skills you need to begin fly fishing, including lessons on: entomology, fly tying, rod set up and casting”.

It is open to participants who are 12-15 years of age, lunch and dinner is provided and the fishing equipment is provided or they can use their own. Most of the day is spent fishing. Sounds great!

Call the Kootenay Hatchery at 250-429-3214 or email at visit.kootenay@gofishbc.com 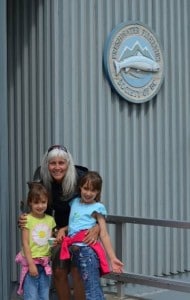 Register early, because space is limited. I can tell you that when my daughters are 12 years old, they will be going there!

Overall, it was one of the best mini-outings we have had as a family in a long time. For us it was a 3 hour drive or so to get there. The girls saw places they had never been before, and everyone had smiles on their faces at the end of the day. It has gone into my oldest daughter`s summer journal, so I know that it was a great trip for her.

Again, the staff at the centre are top notch. They know their jobs, they know the fish and they are excellent with visitors. Let`s face it, if it wasn’t for them, most of us wouldn`t be able to feed our passions or obsessions out on the water. Cathy Fiedler was no exception. She gave our family an outing that will not be forgotten. Thanks Cathy.

One thing to remember, because I didn`t… is that the Kootenay Fish hatchery is 1 hour ahead if you are coming from the Pacific Time Zone. Luckily for us, we left an hour earlier to explore around. We got there just in time.