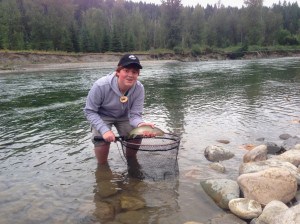 Youth on the Fly day camp was a fishing success.  The day long program held at the Freshwater Fisheries Society of BC’s Kootenay Trout Hatchery started with the basics and evolved until the group of 12 to 15 year olds were all catching fish on fly rods.

The first skill all effective anglers need to learn is what fish are eating, so we hopped into the stream to collect some insects.  Local biologist Jon Bissett helped the youth with identification.  After their entomology lesson, Alex Klingemann next led the group through a step-by-step fly tying class.

Volunteers Garth and Michael Savilow taught the casting techniques and we knew they had done a great job once we put the lesson into action at the pond.  Not only were tangles a minimal issue, but all the participants were catching fish!  Eventually we ventured to the Bull River where success continued and nearly everyone caught a fish.

It was a long day that went by quickly. Even as their parents were arriving for pick-up, the young participants wanted to head back out to the pond to hone their fishing skills.  Their enthusiasm was a rewarding indication that we helped spark the next generation of fly anglers.  Mark August 15, 2015 in your calendars for next year’s Youth on the Fly camp.  Details will be announced on the Freshwater Fisheries Society of BC’s website gofishbc.com

Special thanks to all our volunteers: Garth Savilow, Michael Savilow, Jon Bissett and Alex Klingemann.

Also thanks to Fly Fusion Magazine for donating magazines to participants, and Rapala Canada for providing fly rods and equipment.

Freshwater Fisheries Society of BC