Kokanee & Freshwater Sockeye Salmon fishing are quickly becoming one of the most popular sought out fisheries in the Pacific Northwest. Kokanee are second only to rainbow trout as the most popular game fish in British Columbia. Our fisheries continue to gain popularity for its abundant, trophy-sized Kokanee and fish in the 2 to 4 pound range are becoming more common. Now with the return of the Columbia-Okanagan River Sockeye salmon, this has provided sport fishing opportunities like no other.

The popularity of these fisheries can create some challenges however. Some anglers prefer to harvest a limit of the larger sized fish, while releasing the smaller, more abundant Kokanee in the process. Or catching and releasing once their daily limit has been reached in order to continue fishing. This leads to the question; does releasing Kokanee and Sockeye increase mortality rates?

“Catch your limit and limit your catch” is recommended by numerous fisheries biologist throughout the Pacific Northwest. Local Okanagan biologist Jason Webster from Chara Consulting goes on to explain “The warmer summer months known as the Danger Months are a good time for anglers to  strongly consider stop catch and release Kokanee fishing due to increased mortality”

As summer water temperatures climb into the 70Fs (21c), catch and release mortality rates for Kokanee and salmon species increases. Kokanee and Sockeye commonly move deeper in the water column in July and August, seeking out cooler water temps in the 40F to 50F (5c to 10c). These temperatures are typically found below the thermocline boundary.

It’s not uncommon to catch Kokanee or Sockeye in 60 to 90 feet of water during the summer months. This means a hooked Kokanee or Sockeye may ascend through a 20+ degree temperature change in a short period of time which is extremely stressful to the fish. Combine this temperature change with their expanded air bladders from pressure variation and it can be deadly. Most Kokanee simply don’t have the energy needed to overcome the extra air in the airbladder to swim back down to the cold depths in which they came from. Even though the fish may swim away appearing to be unharmed, there is still a chance that it doesn’t fully recover.

Freshwater Fisheries Society of BC, Fisheries Scientists Dr. Paul Askey adds; “Trolling with  downriggers can be a very effective method to catch fish on large lakes in summer months. The reason why downriggers are so effective is that fish are forced to congregate at specific depths in the water column where they can find temperatures that meet their thermal tolerance limits. However, for this same reason, fish are put under a lot of stress when they are hooked and reeled to the warm surface water. This is not an appropriate method to practice catch-and-release because we expect a high portion of released fish will die. Basically anglers should view summer downrigger trolling as a catch and kill method of fishing.”

Rick Simpson from the BC Wildlife Federation Inland Fisheries Committee comments: “Through my hands on experience Kokanee and Sockeye can easily become floaters when released in high water temperature conditions. It’s better to be safe and keep the fish as part of your daily limit. Let the fish dictate on what size your limit will be for the day”.

This chart gives an example of a typical lake on how water temps and depths are found throughout the summer months. 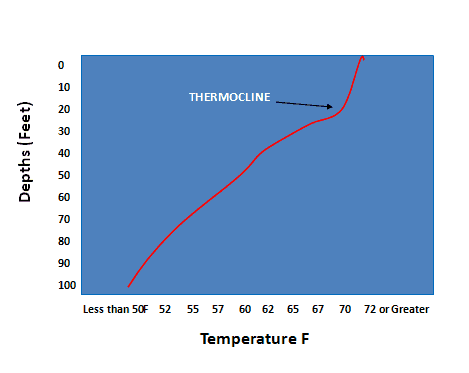 In the cooler months such as early spring, Kokanee are found closer to the surface because the water temperatures are much cooler.   At this time, even though it’s not recommended, releasing a Kokanee would probably result in a more positive outcome.  If an angler chooses to catch and release Kokanee there are some preventative steps to take to decrease mortality.

The fact is – mortality for caught and released Kokanee and Sockeye are much higher than most of us anglers want to believe or accept. When to choosing to practice catch and release, it comes down to each angler to make their own judgement call based on personal ethics and knowledge. In the end, all Kokanee make incredible table fare no matter what size they are.  So enjoy! By making conservational decisions it will help to ensure we still have an abundance of Kokanee and Sockeye to target and catch well into the future!