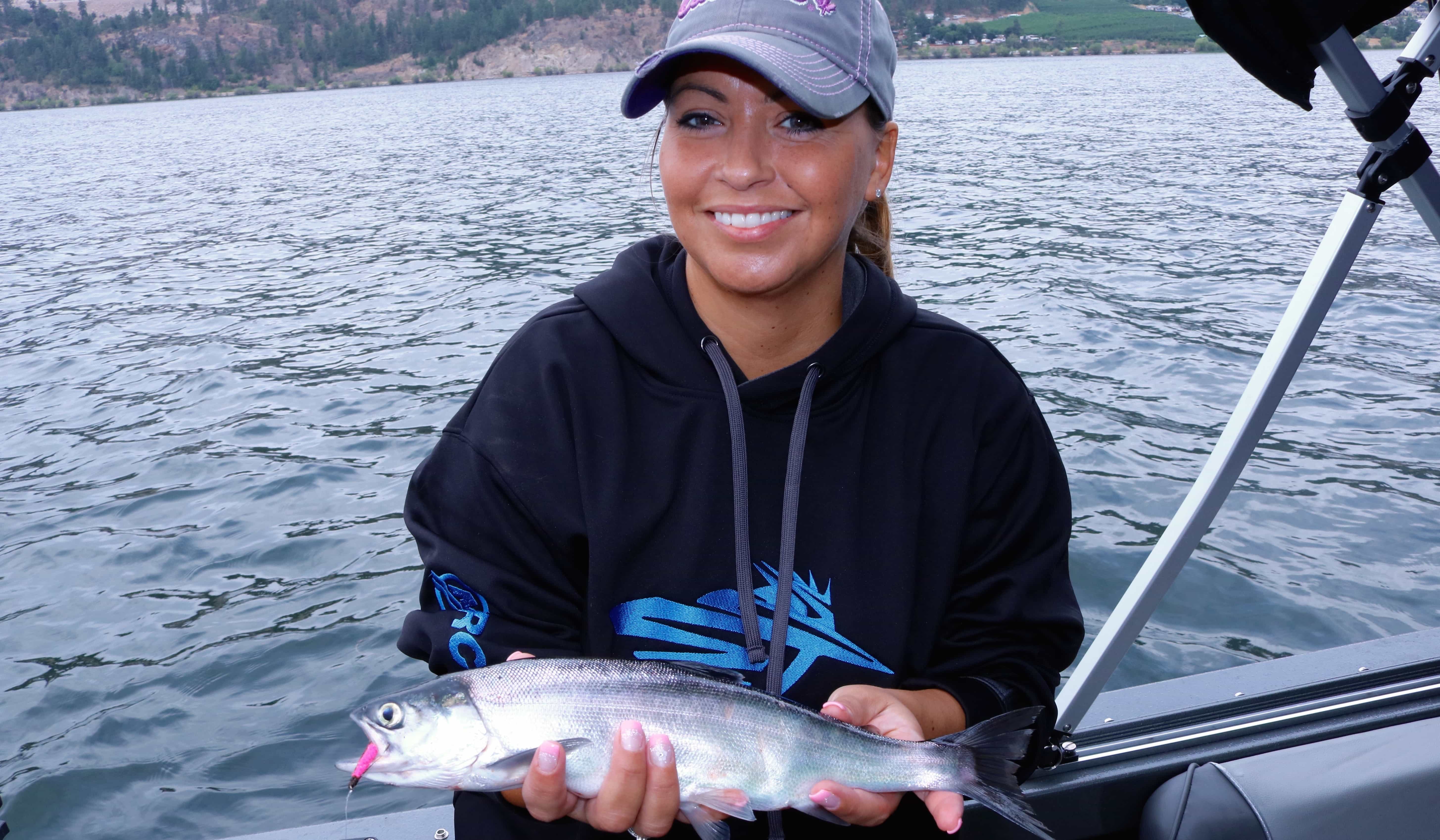 When most anglers think of freshwater fly fishing in British Columbia they don’t think of Kokanee on the fly. Come on let’s admit it, the traditional angling method for these chrome beauties is by trolling the lakes with heavy hardware that for the most part we fight the gear and not the fish. Kokanee provide one of the most exhilarating fishing experiences due to their scrappy behaviour resulting in an aerobatic fight with explosive runs! So why not pursue them on the fly? Many say it can’t be done but anglers are quickly catching on that this is simply a myth.

Kokanee are land locked Sockeye Salmon that typically reside in large freshwater lakes throughout the Pacific Northwest. Their primary diet consists of Zooplankton called Daphina that is found at a variety of depths. Zooplankton are mirco organism that appear in a red and green translucent of a colour. They are usually found twitching and drifting over deep water. Kokanee feed on Zooplankton by straining them with many fine combs on their gills called gill rakers.

Over the past ten years fisheries managers have been developing Kokanee stocking programs for small lakes in British Columbia. The key to the stocking program’s success is that the lakes have to be nutrient rich enough to support a high mass of Zooplankton. These water bodies must also provide cool enough water that won’t affect the Kokanee due to Kokanee being very temperature sensitive. Lakes within the central BC Interior such as the Cariboo Region have seen incredible success with this program. 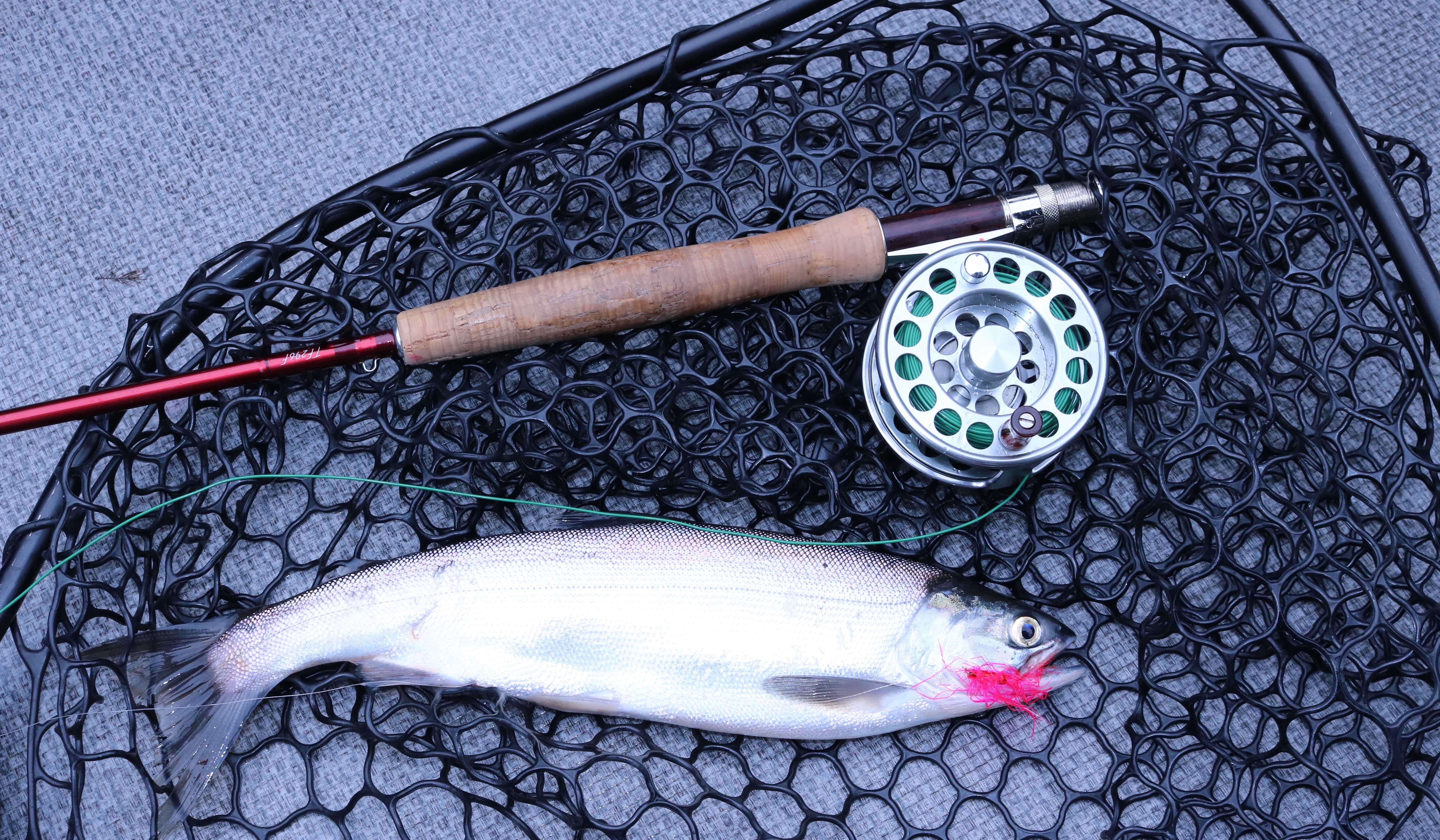 For many years provincial biologist looked for ways to develop sport fishing opportunities throughout out the province. The biggest challenges they were faced with were lakes with a high population of native coarse fish such as Pike Minnow, Chub and Shiners would out compete Rainbow Trout for food. This is when they turned to Kokanee for the perfect solution. Unlike these other fish species, Kokanee live majority of their life in open water areas of the lake. The coarse fish and Rainbow Trout live the first years in shallow water near the shore. Due to the low competition for food, Kokanee can thrive in a fishery with a high population of coarse fish without negatively impacting Rainbow Trout.

So how does one go about catching a Kokanee on a fly? I get ask many times throughout the year if it’s even possible to pursue Kokanee on the fly because most anglers are convinced of two misinterpretations that defer them from trying.

Anglers tend to believe that Kokanee only strike our gear due to a reaction strike. This boasts true when using a small dodger and hoochie, however a well-presented fly at the right time can replicate an easy meal for a Kokanee. The other misunderstanding about Kokanee is that they are only found the mid water column within the deeper regions of the lake. Knowing the Kokanee’s characteristics, requirements and during the right time, one can have success pursuing Kokanee while they are residing in shallow shoals and close to the surface. Let’s explore this a bit more…

The winter months can be challenging for a Kokanee due to the lack of food. Once open water conditions arrive Kokanee will aggressively seek forage throughout the shallow zones of the lake. While cruising these shallow areas Kokanee will adapt their diet to larger invertebrates such as chironomids larvae and pupae, mayfly and damsel fly nymphs. Feeding on these invertebrates provide a much higher level of calorie intake than Zooplankton. During this period fly anglers can have great success of catching Kokanee.

When the surface temperature of the lake is still within the comfort zone for a Kokanee, they will surface feed on any opportunity that presents itself. A great example of this is a mayfly or damsel fly hatches. Many of us have been on the water during a mayfly hatch and it looks like the water is boiling due to the amount of fishing feeding on the emerging insects. Rainbow Trout are not the only fish that take advantage of this, Kokanee do as well. Kokanee surface feeding is even more prevalent in northern lakes such as the Cariboo region due to the water surface temperature being cooler for much longer period of time than the southern interior lakes. The extra bonus about presenting a Mayfly on the surface is that an angler can intercept a Kokanee or Rainbow Trout at the same time. This no doubt makes for an incredible angling experience!

As the lakes start to stratify due to increased temperatures Kokanee will retreat back to the deep water to refuge in cooler water that is holding a large amount of Zooplankton. Even though the fish are now suspended over deep water it doesn’t mean they won’t take a fly. Like their sea going cousins, Kokanee can double their size from spring to fall in their spawning year of their life cycle. This means they will aggressively feed to keep up with their metabolism and will seek any large forage opportunities such as a deep-water chironomid hatch. 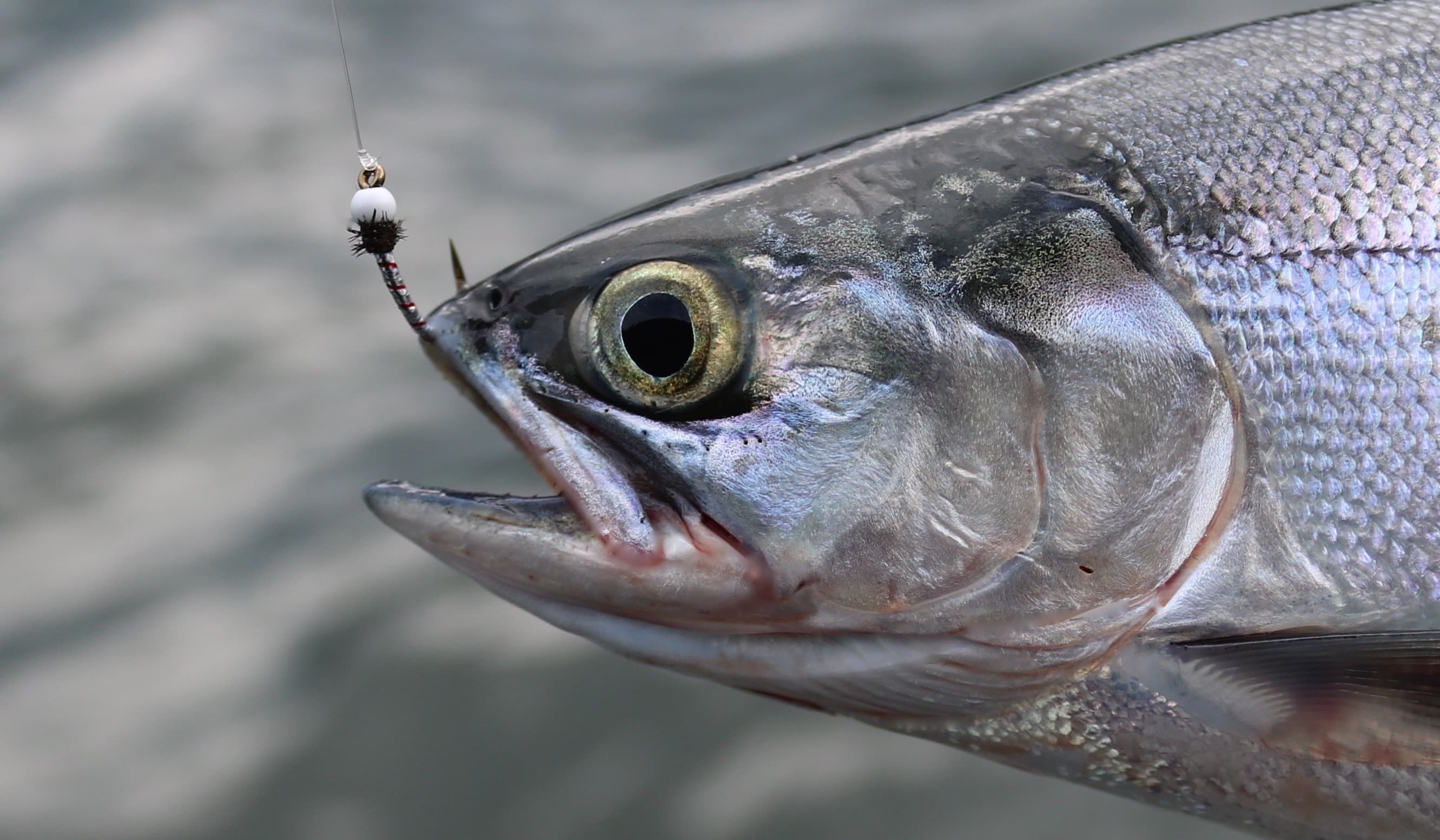 Kokanee are a schooling fish, which means to have success you must locate the school and remain with the fish. Whether it’s a larger water body or a small lake Kokanee can be found in similar areas due to their needs.

In the spring Kokanee will be found in and around shoals that offer quick drop off ledges to deep water. This allows them to cruise the shallow water around 15 feet or greater to feed on insect hatches while being able to make a quick refuge to the depths if they feel threaten.

Keeping a keen eye out for insects emerging and hatches occurring is a great way to locate Kokanee in the spring. A good way to locate this insect activity is by watching birds swooping down and feeding on the lake surface. Many times you’ll see the surface boiling from Kokanee coming up and foraging on an emerging insect. Once you have located this activity set up and fish this zone.

Paying close attention to which direction the wind has been blowing will also help dictate the area in which you’ll find active feeding Kokanee. Zooplankton and chironomid hatches will be pushed to the end of the lake in which the wind is blowing. Targeting wind blown points and shoals is also another good bet to locate fish.

In the summer months Kokanee will be prominently be dwelling in the mid water column within the thermocline over deep water. Using sonar to locate schools will increase your odds immensely.

The tactics in which you are going to pursue Kokanee on the fly are very similar to Rainbow Trout. However there are some very vital factors to take into consideration. First off, Kokanee are extremely timid when in shallow water. This is why it’s important to set up off the ledges with a double anchor system and cast towards the shoals. Use the smallest strike indicator that you can get away with. A smaller indictor is less impactful when it hits the water to reduce scaring the fish. When a Kokanee takes your fly it can be a very subtle hit to the point that the indictor will slightly move rather than sink. The smaller profile allows you to see these subtle strikes.

When fishing with indicators make sure that there is little to no slack in the line between your rod tip and the indicator. It’s a good practice to stretch out your fly line to remove any the small coils prior to fishing, this will help you sense the strike. Point your rod tip towards the water allowing room for a large swoop when the fish strikes. The hook set should be in one swift motion rather than a fast hard set. Kokanee have extremely soft mouths and once hooked they go absolutely crazy! They will jump with aerobatic displays while make aggressive runs, which makes them so enjoyable to purse on a fly. Be prepared to strip quickly as they will often race towards the boat and find your anchor lines.

The use of intermediate and fast sinking lines are also an effective way to get in the Kokanee’s zone. I would recommend only using sinking lines once the Kokanee are located in the deeper water and stick with the floating line and indicator when they are up in the shallows.

Trolling a fly with a sinking line once Kokanee are compressed in tight schools in the mid water column can yield excellent results. I personally have experienced excellent results using fast sinking line trolled less than 1 mph with small fly patterns such as a Doc Spratly. Once the fly is within the fish’s strike zone I pump the rod every 10 seconds creating a stop and go action to the fly. This creates an erratic action to the fly that tends to provoke a Kokanee to strike!

One good technique is to troll or retrieve a fly to locate an active school. Once the school is located, anchor and switch to a smaller chironomid, bloodworm or small shrimp pattern. Once an active group of fish are found you could be in for a fun filled quick limit!

My preferred fly rod of choice when Kokanee fishing is an 8’ 5wt rod. The 5wt rod provides a very limber action that reduces the amount of fish I lose due to their soft mouths. Kokanee in BC average between 1 to 1.5lbs, and some water bodies catching a Kokanee over 3lbs can be expected. The 5wt fly rod can handle all these size of Kokanee very nicely.

Like gear fishing, Kokanee tend to prefer a variety of fly patterns in bright colours such as pink, silver and chartreuse. When surface fishing using a smaller profile Mayfly or Damselfly can be accepted.

Proven Bead Head Chironomid patterns usually consist of colours in shades of brown, black, orange, green and red. Sizes #10-#16 tend to be the most popular.

The key to fly fishing for Kokanee is not only patience, but it’s about learning how to get your fly within the strike zone and keeping it there. As always with pursing Kokanee, what works one day may not work the next. I can reassure you that once you crack the code and experience a good day of catching Kokanee on the fly it will be hard to go back to the traditional hardware.