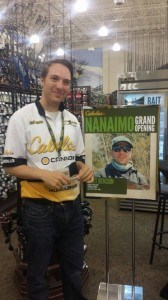 I bet when all of the bigwigs of Cabela’s announced to their management staff that the next big opening for Cabela’s was to be in Nanaimo, BC, most of these people were thinking where is Nanaimo? Well, Nanaimo is Vancouver Island’s second largest city with a population of almost 80 thousand. It is a great point of access to West Coast fishing and North Island hunting. Most people in town live a very active outdoor lifestyle. It’s a perfect fit for Cabela’s newest store and the first one in BC.

On Opening day there was over 1700 people waiting in line. I have only lived in Nanaimo for three years, but I have never seen this many people waiting for anything. The opening of Cabela’s will be a historical moment for the town of Nanaimo and Vancouver Island.  Nanaimo usually doesn’t receive any “firsts”. New stores or restaurants are usually opened first on the mainland.  Nanaimo doesn’t even have a Lulu Lemon store and their head office is in Vancouver.

I have to give the Cabela’s group credit, on opening day, the entire store was finished to perfection.  The inside of the store was flawless and even the landscaping around the building was done.  A lot of companies rush openings with things still looking unfinished. Cabela’s has done a number of these openings in Canada and they have it down pat.  Once the store opened, the customers were quickly ushered inside.  The shelves were stocked full of great merchandise.  They also brought in members of the Cabela’s Pro Staff to meet the customers and entertain them while they waited in line.

It was really cool getting to meet and hang out with all their Pro Staff, most of whom were from Ontario. I have to say the most popular autograph signing booth would have to be Fish TV. I didn’t know how it was going to be hanging out with the Fish TV guys, but it was better than expected.  They are characters and great guys to hang out with.

Another highlight of the opening for me was hanging out with Gord Pyzer.  A lot of people out West might not know of him too well, but he is a fish legend back in Ontario.  He writes for a number of magazines and when you see fishing shows shooting in North Western Ontario, Gord is either on the show or guides the TV show hosts.  He has also designed the new KingFisher 2025 Flex SC XP part of their new multi-species boat line.

Not only did Cabela’s have fishing personalities arrive for the opening, but they also brought in hunting Pro Staff.  Another highlight of mine was meeting Steve Eckland.  He is the host of The Edge on Wild TV.  He is a super funny guy and fun to hang out with. They need to make a behind the scenes reality show with this guy.  He has the potential to be huge in the outdoor industry.  What was also interesting was being introduced to the Savanna Koebisch, who is part of the hunting Pro Staff.  She is a going to be the next Eva Shockey. She is only nineteen years old and has already killed a number of trophy animals all over North America, Europe, and Africa.  She also has a number of hunting articles published in popular magazines throughout North America.  When she is not traveling for hunting trips, she is studying abroad to become a neurosurgeon. If there are any sponsors out there that want to add the next biggest female hunter, look this girl up.

Overall, it was a great four days meeting and hanging out with the Cabela’s family and getting to check out the new store.  This store is designed to carry products that people in BC will use for hunting and fishing.  If you don’t see some products in store or online that you would like to see, leave your comments or email Cabela’s Canada direct.  If people comment and email, it lets the buyers at Cabela’s know what they should carry in store.  So, next time your on Vancouver Island make sure to check out Cabela’s in Nanaimo.