Getting out on the lake is special treat so when my brother called asking if I wanted to go I was more than eager to get out there.

When I got up I had a text message saying that I better be ready for rain because there was a 40% chance and it wasn’t going to drive us off the lake.  That’s when I looked at the temperature out -0.1° Celsius, more like snow I thought.

The plan was to head up to Allison Lake on highway 5a but when we got out there and saw the boat launch we were worried about getting stuck.  So we headed back towards town and decided to stop at MacKenzie Lake.  This would be a change in plans that we would not regret.

It hadn’t warmed up much by the time we actually got to the lake it must have only been about 3°C with a southerly wind but we were determined to get some fishing done. 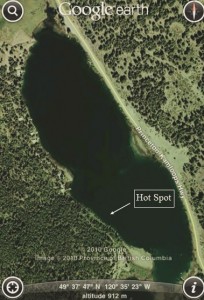 As soon as we pushed off from shore the fish finder was lighting up.  There were fish everywhere!  The lake was a lot deeper than we had originally thought with spots dipping to the 60 foot mark.  The lake is an interesting design you will be going along and the floor is around the 50 foot mark then all of a sudden it will shoot up to 30 feet.  There were fish all over from right on the bottom to jumping on the surface.

The water temperature averaged about 51°F and early on the weather had the fish being almost stagnate.  We got a few drops of rain and that all changed.  The fish started to move and then we started landing the big ones.

We trolled all day long using Silver Colorado Gang Troll (Luhr Jensen) with Gibbs Rainbow Sparkler Spinner.  Like I said things were a little slow in the beginning but once the fish started to move it didn’t take long for the action to start.  Danny opened the day brining in the first trout and then the second but I soon caught up.  By the end of the day we had caught 12 trout averaging out at 1.75lbs with the biggest one of the day at 2.5lbs. 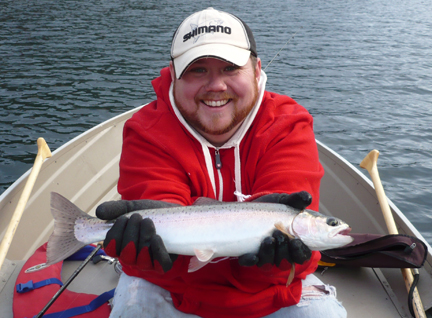 What a day!  I am used to river fishing in the Similkameen where large fish are something of a rarity so catching a 2.5lb trout makes you remember why you love to fish.  All in all it was a great day of being on the lake with my brother.